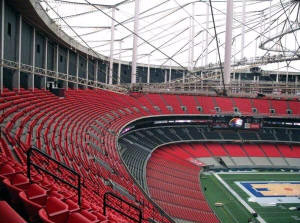 A Gainesville firm has a key role in the recent renovation of the Georgia Dome.

Among the several planned improvements at the Dome was the need for both new seating and color themes. When Georgia Powder Coating (GPC) was approached with the challenge to powder-coat and assemble some 80,000 new and refurbished seats for the Georgia Dome, Dallas Cooley, V.P. of sales at GPC, said he was eager to accept the challenge.

“When Georgia Powder Coating was approached with the project we knew we could handle a job of that caliber,” Cooley said. “The overall size of the job is not uncommon for us. We are re-powder coating about 33,000 refurbished seats from the upper and mezzanine levels. We will also be powder coating and assembling the roughly 38,000 new seats that will go on the lower level.”

The time line was the challenge, Cooley said.

The first production run started in February. The seats are installed as each production run is finalized because of scheduled events at the Dome, and Cooley said the job will be completed prior to the Falcons first pre-season game Aug. 9. He said the job is the equivalent to powder-coating a minor-league ballpark every week.

In addition, Cooley said Georgia Powder Coating is proud of its commitment to “going green.” Powder coating creates very little volatile organic compound emissions compared to those of conventional liquid paint, he explained. In addition, more than 1 million pounds of the plastic used from the old teal seating at the Dome and 225,000 pounds of aluminum will be recycled from the project.